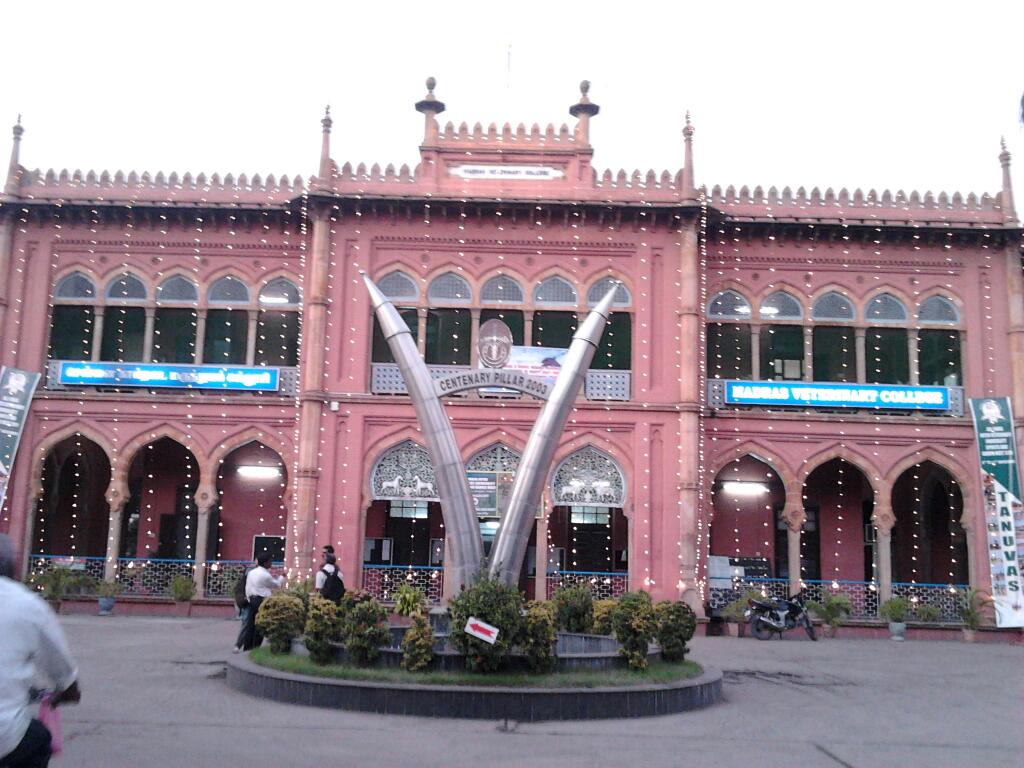 The seed for TANUVAS was sown as early as 1876, when the Madras Veterinary College was started as an Agricultural School in Chennai to offer diploma and certificate course in the field of veterinary and animal sciences. The institute attained the status of a college in the year 1903 and admitted 20 students for a three-year diploma course called GMVC (Graduate of Madras Veterinary College).
Based on the recommendation of the Royal Commission on Agriculture, the college was upgraded to impart degree in veterinary science. Although the college was the fourth veterinary institution to be started in India, it was first veterinary college in the country to be affiliated to a university, the University of Madras in 1935 and the Bachelor of Veterinary Science (B.V.Sc.) degree course was started in 1936. The University of Madras also recognized the college as a centre for postgraduate education. In 1969,
the college was made as the Directorate of Veterinary Education and Research. The college was then academically affiliated to Tamil Nadu Agricultural University (TNAU) in 1974 and became a constituent unit of TNAU in 1976. To meet the demand of veterinary education and research, a second veterinary college was started in Namakkal in 1985 subsequently two more vet schools at Thanjavur and Tirunelveli during 2012.
Realizing the importance of education research in animal and fisheries sciences so as to increase its productivity towards better income generation for the resource poor farmers, the government of Tamil Nadu established the first veterinary and animal sciences university in Asia on 20th September 1989 with its head quarters at Chennai with the name Tamil Nadu Veterinary and Animal Sciences University (TANUVAS). The mandate of the University is to impart education, to ensure advancement of learning and prosecution of research and to undertake extension to rural people in cooperation with the government departments in different branches of veterinary and animal sciences. In recognition of the University's credentials, the Indian Council of Agricultural Research has accredited this university. In commemoration of Silver JubileeYear(2014)celebrations, TANUVAS is organizing the XII Annual Convention of Society for Conservation of Domestic Animal Biodiversity (SOCDAB) and an
International symposium on "Sustainable Management of Animal Genetic Resources for Livelihood Security in Developing Countries" to bring together scientists, academicians, administrators, field practitioners and livestock keepers under one umbrella.
TANUVAS has been conferred with the prestigious “Sardar Patel Outstanding ICAR Institution Award- 2011”, recognizing its outstanding performance in education, research and extension in the country in the field of Agricultural Sciences including Veterinary, Animal and Fisheries Sciences. TANUVAS is the FIRST VETERINARY UNIVERSITY in the country to bag this coveted award. Presently TANUVAS is functioning with four Veterinary Colleges, one Food Science College, one Poultry Science College, seven Research Stations, one Feed Technology Unit, twenty one University Training and Research Centres, three Krishi Vigyan Kendras, three Farmer's Training
Centres, eleven Research Laboratories, two Ethno-Veterinary Herbal Training and Research Centres and one Agricultural Technology Information Centre spread across the state.
TANUVAS has active collaborations with several overseas universities including Auburn University, Ohio State University, Virginia Tech University, Michigan State University, USA, GALVmed, U.K, University of Nottingham, UK. TANUVAS is engaged in collaborative research projects with the above universities.
Contact Organizer